White Rose Bakes are an independent Bakery based in Yorkshire producing all kinds of amazing items and have utilised the Irinox MultiFresh to increase production times and make the whole operation more efficient.

The Irinox MultiFresh is being used for a multitude of tasks but where the biggest impact has been seen is in production of the Millionaires Shortbread. In the past waiting times for the Caramel to cool before being able to put the final chocolate layer on was a matter of hours as the items air cooled meaning the overall process lasted a day or more. Now by using the Irinox Multifresh this same task can be completed in a matter of minutes. Further more due to the programmable nature of the Irinox unit it can be set to be less aggressive meaning it never has a detrimental impact on the product itself ensuring perfect presentation and results for every batch.

In addition to this Alice who runs the business has used the low temperature heating function to make Meringues and the results were amazing. By being able to utilise the Irinox Multifresh for this function it meant she could still use her ovens at the same time for other tasks increasing overall productivity and saving time. This shows the full range of capabilities of the MultiFresh unit that one minute it can be rapidly cooling a product and the next using positive temperatures to cook items.

The truly MultiFunction nature of the Irinox Multifresh means not only does it deal with all Blast freezing and chilling needs but can take on a multitude of other tasks such as Chill, Freeze, Hold, Pasteurise, Prove, Thaw, Cook, Defrost and much much more while being fully programmable meaning you can tweak it to your specific needs making this unit ideal for all sectors – Gastronomy, Patisserie, Chocolate, Bakery & Gelato. 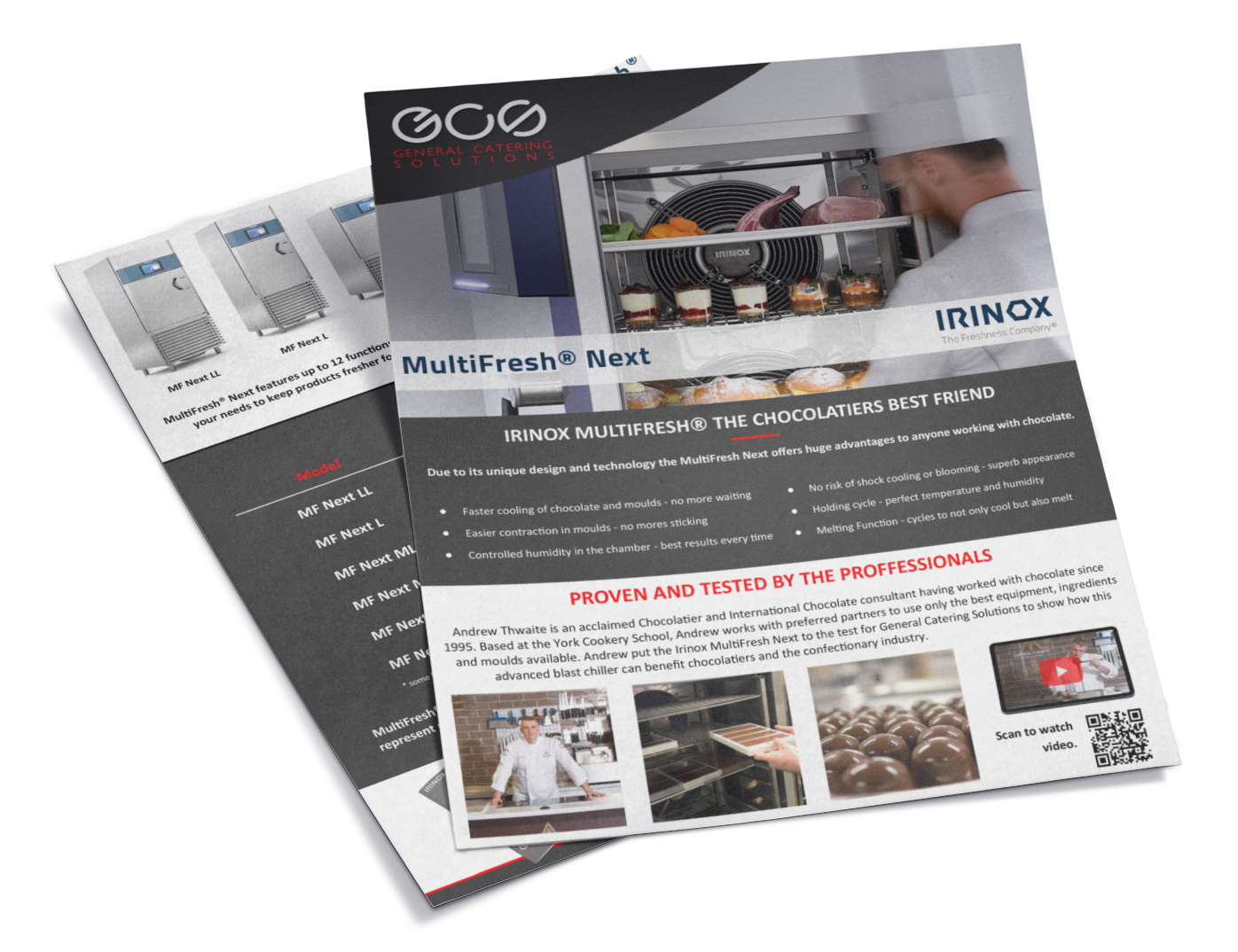 Looking for spare parts for your commercial catering equipment?

This website uses cookies to improve your experience while you navigate through the website. Out of these, the cookies that are categorized as necessary are stored on your browser as they are essential for the working of basic functionalities of the website. We also use third-party cookies that help us analyze and understand how you use this website. These cookies will be stored in your browser only with your consent. You also have the option to opt-out of these cookies. But opting out of some of these cookies may affect your browsing experience.
Necessary Always Enabled
Necessary cookies are absolutely essential for the website to function properly. These cookies ensure basic functionalities and security features of the website, anonymously.
Functional
Functional cookies help to perform certain functionalities like sharing the content of the website on social media platforms, collect feedbacks, and other third-party features.
Performance
Performance cookies are used to understand and analyze the key performance indexes of the website which helps in delivering a better user experience for the visitors.
Analytics
Analytical cookies are used to understand how visitors interact with the website. These cookies help provide information on metrics the number of visitors, bounce rate, traffic source, etc.
Advertisement
Advertisement cookies are used to provide visitors with relevant ads and marketing campaigns. These cookies track visitors across websites and collect information to provide customized ads.
Others
Other uncategorized cookies are those that are being analyzed and have not been classified into a category as yet.
SAVE & ACCEPT

Please fill out the form below with as much detail as possible and a member of the team will get back to you with the best price.